You are here: Home › internetofthings

Internet of Things… there’s nothing like cutting through hype and getting your own hands “dirty”. Chris Forsberg is visiting at our Stockholm office and the desks are now occupied by iBeacons, Arduino boards, Electric Imp-stuff, and soldering irons. Today, Dag Pettersson joined us and showed his latest experiments.
Below you can see some of the action and one of the finished ideas is a flower that is connected to the actual sales results of a customer, and depending on sales performance, the flower “changes” color. Only the imagination is the limit and that’s what I love with new technology. 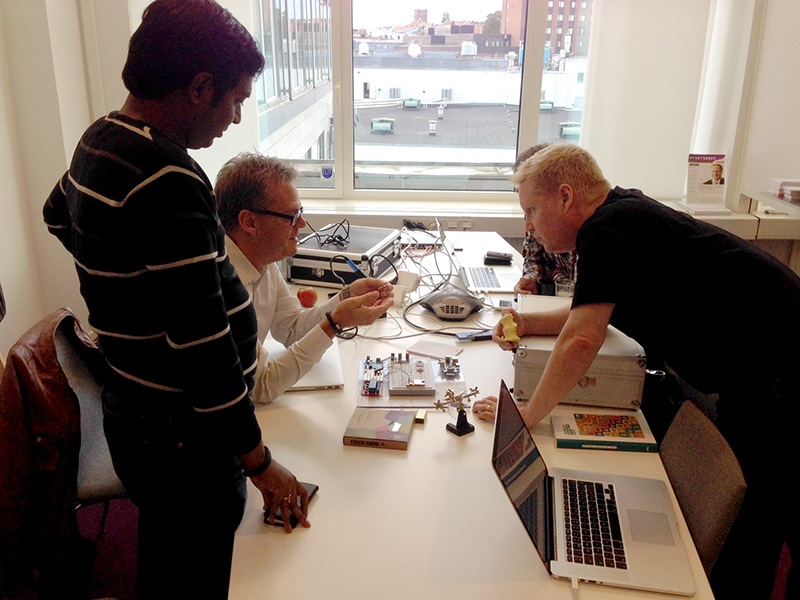 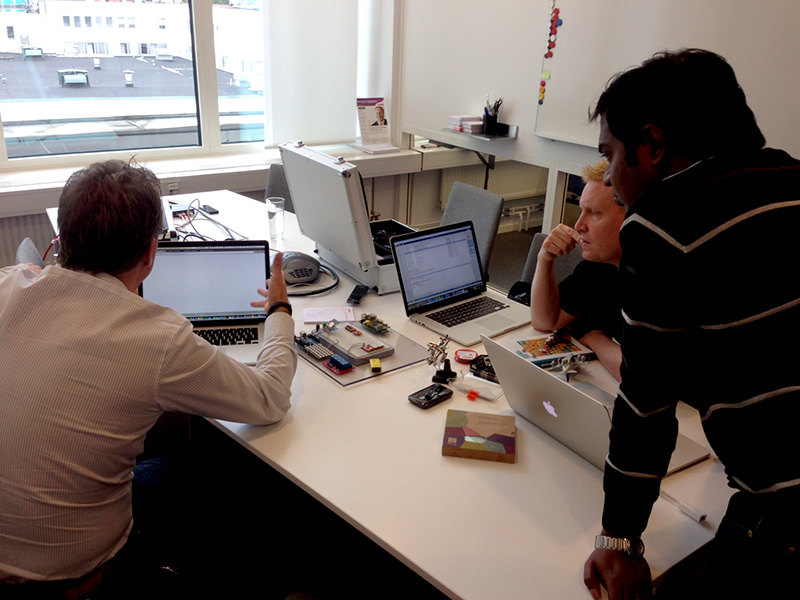 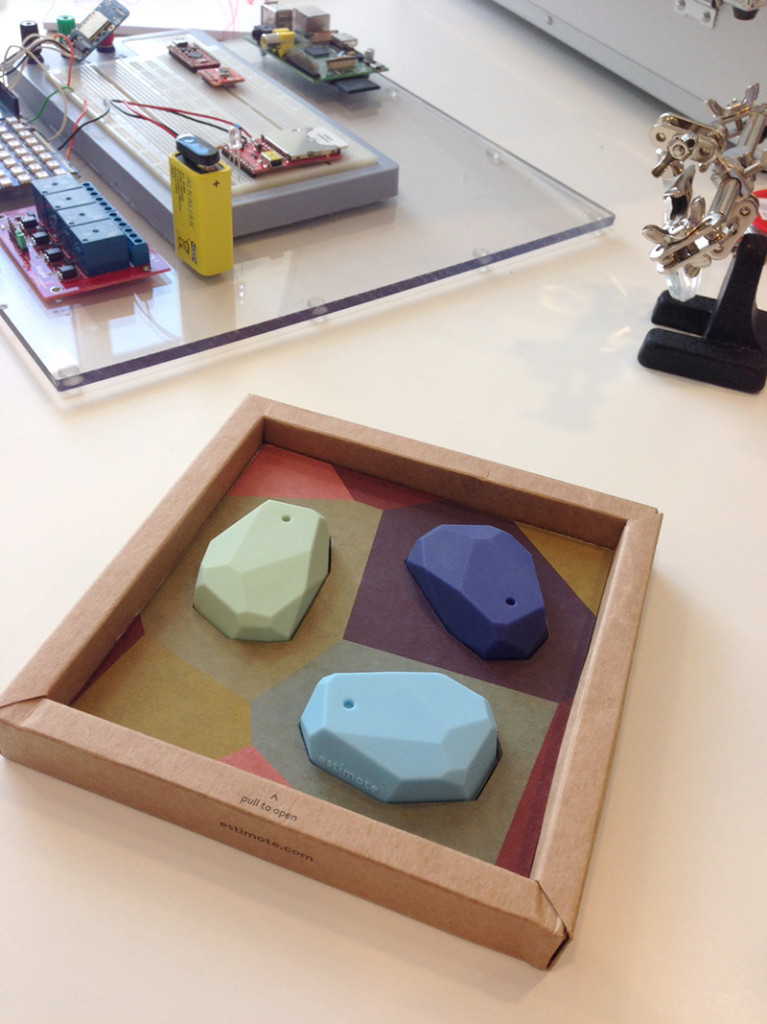 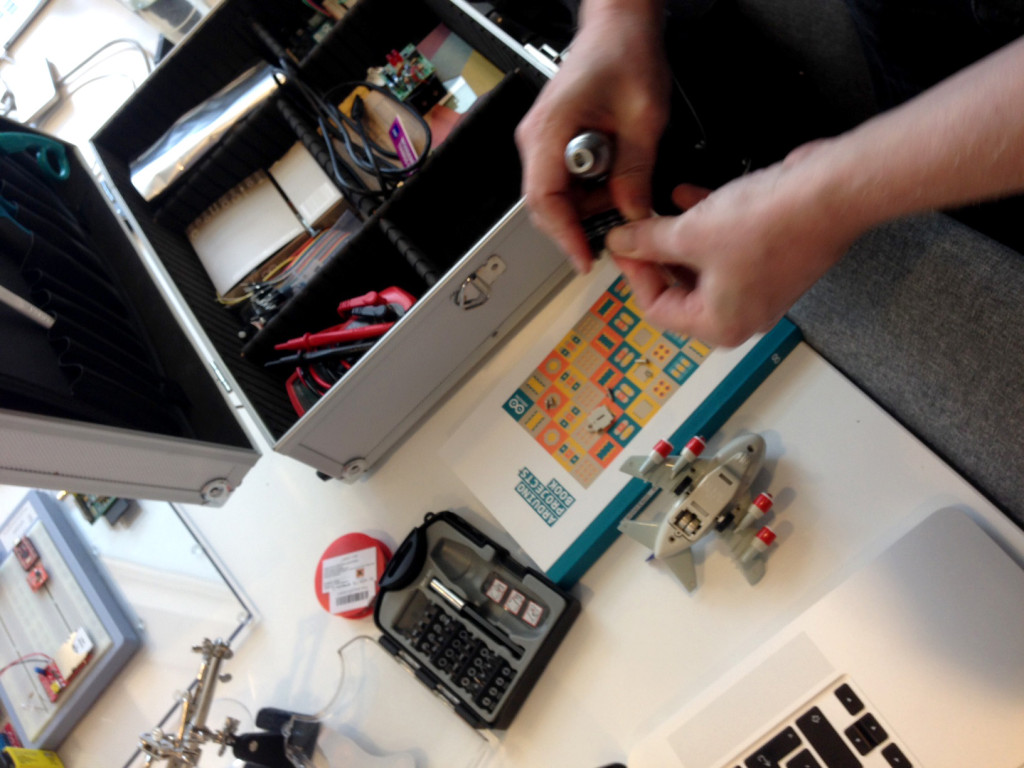 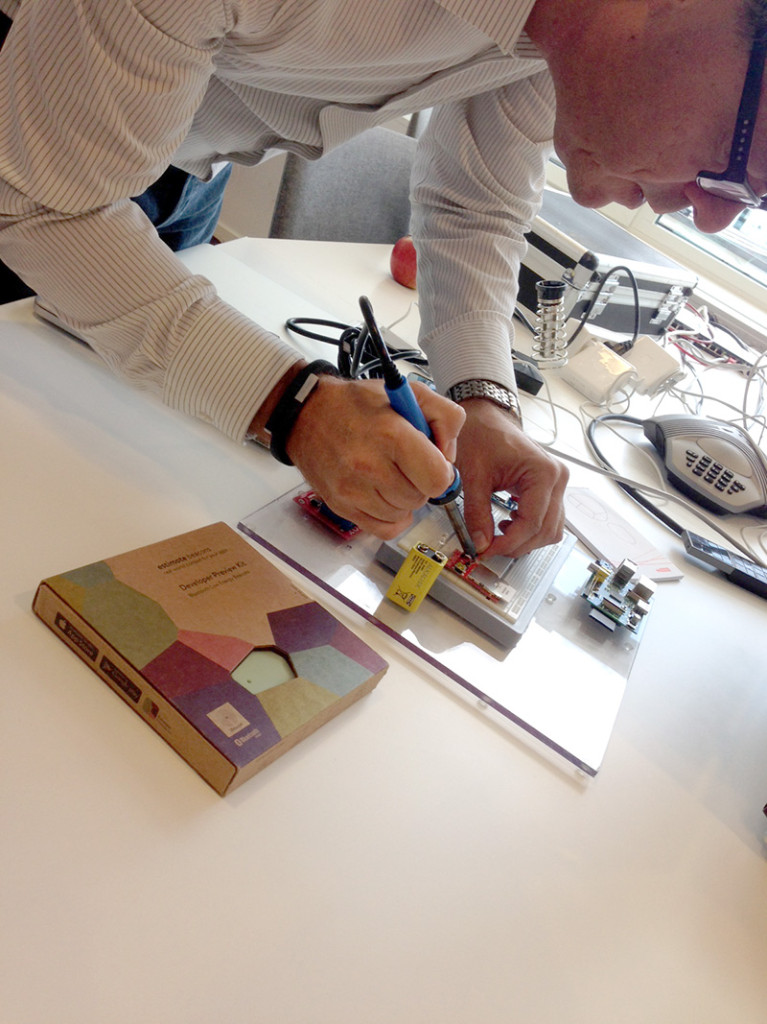 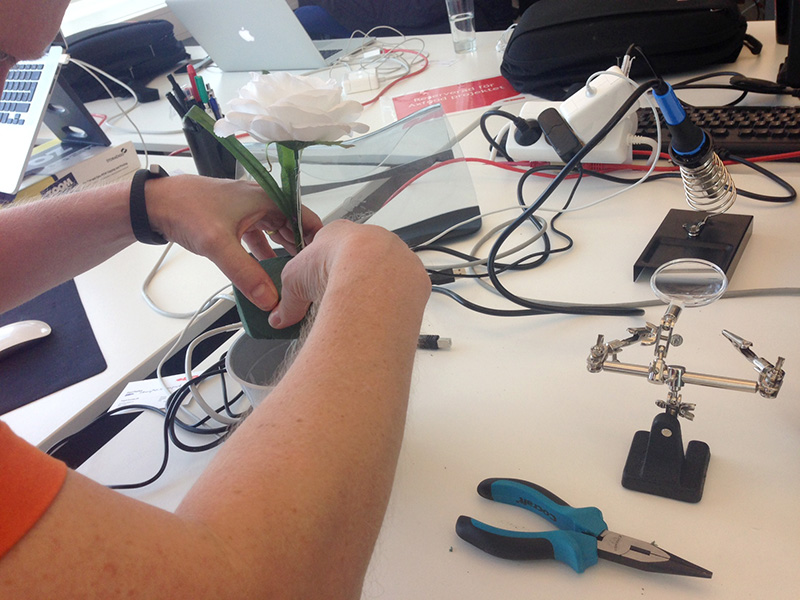 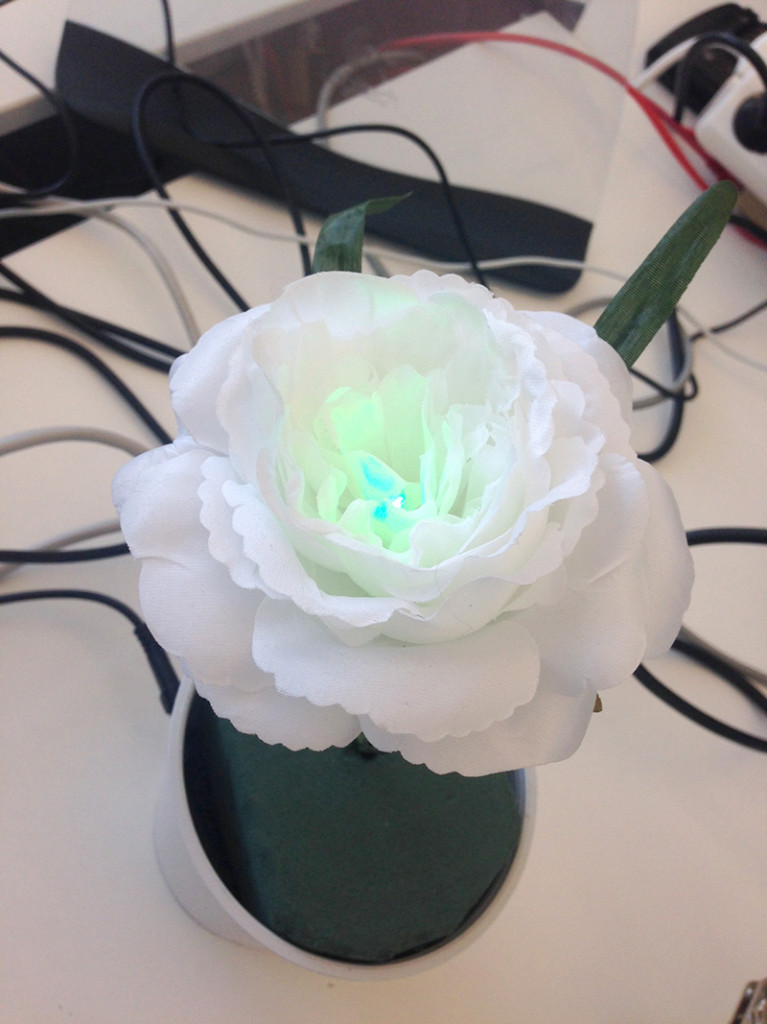 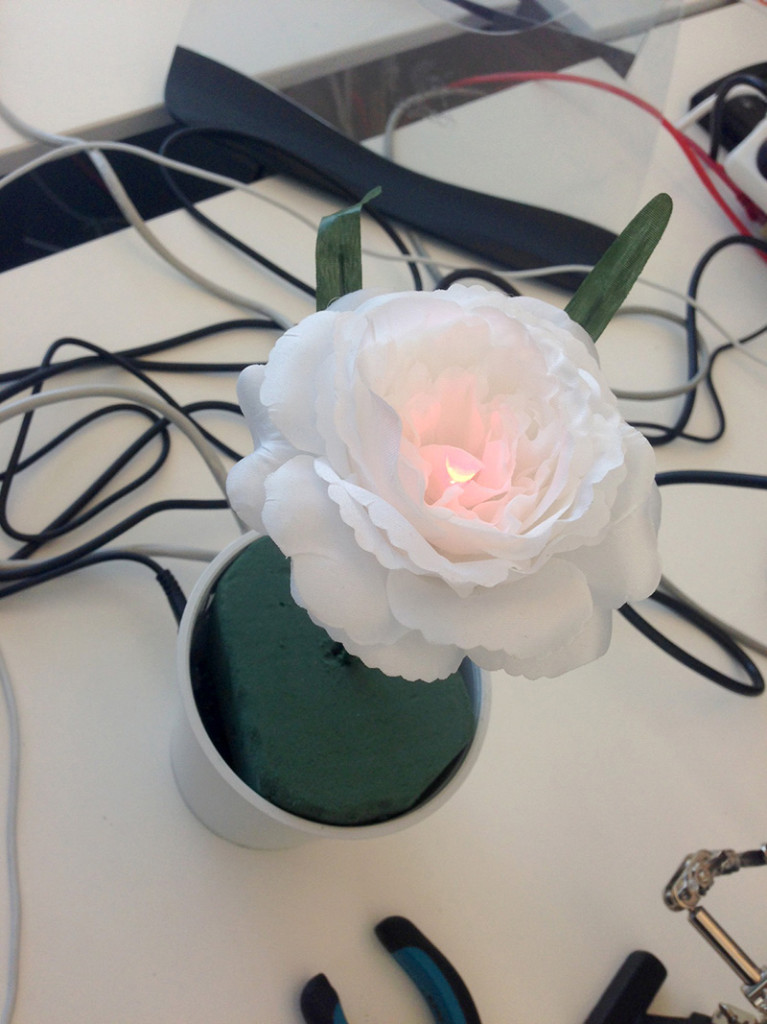 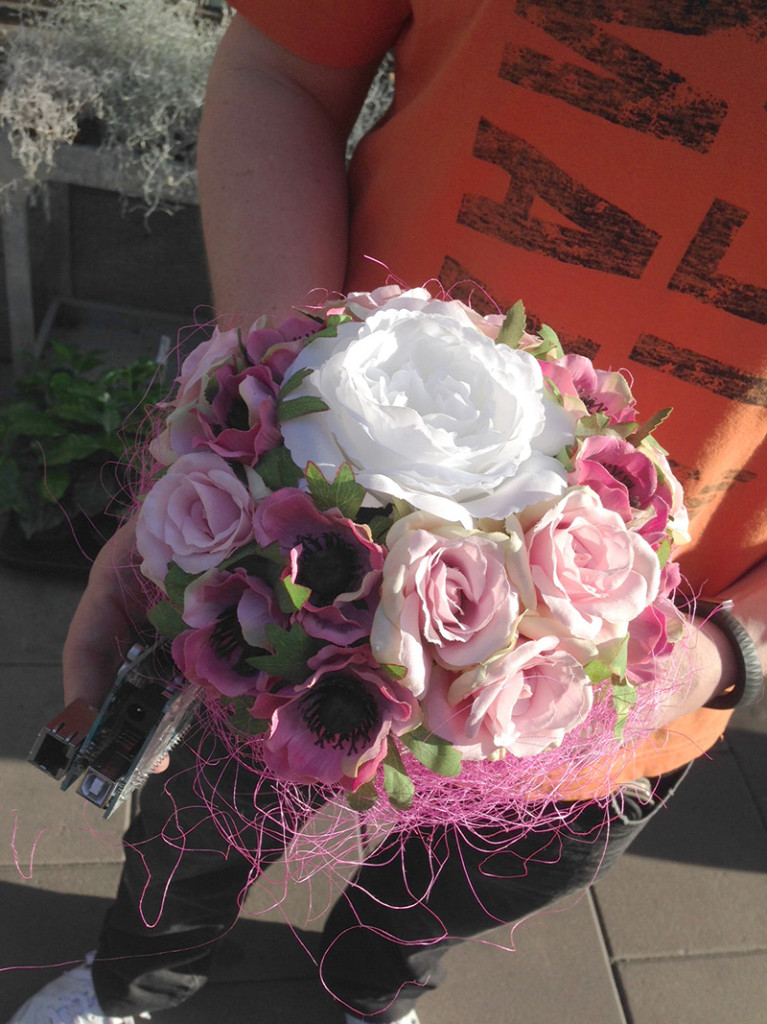 Sogeti’s trend lab, ViNT, recently published its second report on “Things”: “Empathic things: Intimate Computing from Wearables to Biohacking”. The 40-page report “explores the coming transition toward a more empathic form of computerization. … even more intimate, human-oriented and ubiquitous…. We are witnessing a computer boom in devices of all kinds, shapes and sizes – around, on or inside the body – that behave increasingly smarter and link up more and more intuitively with mankind’s extremely personal and natural interface.”

Topics like the shift from systems of records to systems of engagements, things IN-ON-AROUND you, and the increasing level of intimacy and intelligence in things, are addressed in the report. If you want to go deeper in understanding the context of wearables like Google Glass and where we’re heading, this report is well worth the read. 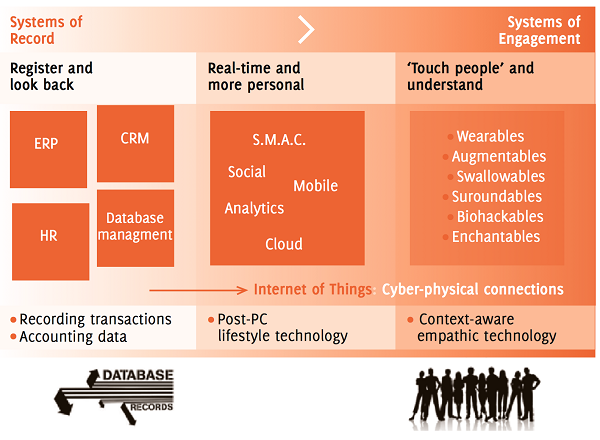 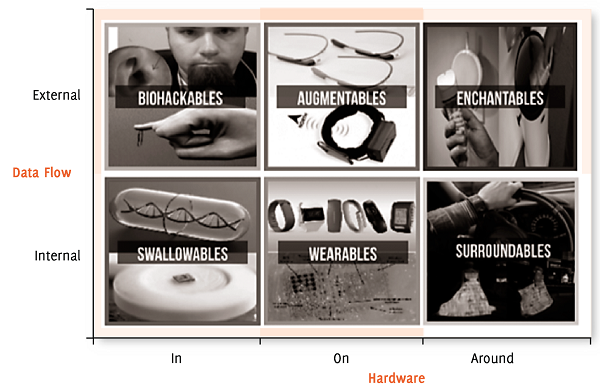 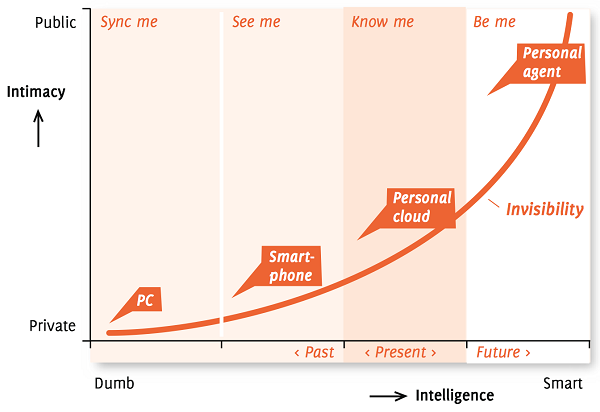 Intel recently showcased the Edison Development Board. It’s a PC not much bigger than an SD-card. It’s based on Intel Quark Technology and the specs are impressive given that the performance seems to, without any problems, be able to address most IoT ideas I’ve seen so far: 400Mhz, 2GB, Bluetooth, WiFi, USB…

It’ll be around this summer and so will a number of Kickstarter-projects, I assume.

openPicus Flyport is an increasingly popular “Internet of Things”-board. Critical c’s: Cheap, capable and community. Check out the community projects for inspiration, source code and more… Below is a video of a setup including a WiFi converter allowing you to monitor your BBQ temperature on your phone or using COSM and Flyport Wi-Fi. Well, then…

A common language between things is one of the most critical aspects in enabling even the most basic of the “Internet of Things”-visions. MQTT (MQ Telemetry Transport) is rapidly taking gaining momentum as that language.

MQTT is “a publish/subscribe, extremely simple and lightweight messaging protocol, designed for constrained devices and low-bandwidth, high-latency or unreliable networks.”, in other words a language which is suited for allowing things to connect and communicate. MQTT  is not new. It’s been around since 1999, invented  Dr Andy Stanford-Clark of IBM, and Arlen Nipper of Arcom (now Eurotech). For many years, it’s been waiting in the shadows, enabling a few M2M-solutions (machine to machine). But now it seems it’s just about to take off in a major way.

One of the simpler ways of assessing popularity is to use Google Trends which generates a chart based on how often a term is searched for. Below is the chart for “MQTT”.

Another supporting indicator that MQTT is starting to mean more than it did just a couple of years ago is revealed by looking at what other search terms is used in combination with MQTT (android, client, mosquitto…): 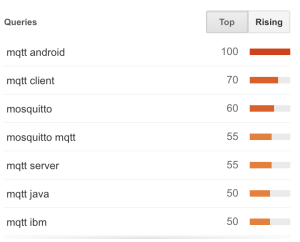 Many of the tools, frameworks and APIs that I mentioned in my post “Internet of Things development tools and framework” implement support of MQTT, including Mosquitto which is a message broker (like FedEx, UPS, DHL…) for MQTT.

IBM is investing significantly in MQTT, Facebook uses the protocol in its messaging app and it’s in the process of undergoing standardisation at OASIS. The IBM related investments include support in their MessageSight appliance, reported to be able to manage more than ten million MQTT messages per second coming from a million “things”.